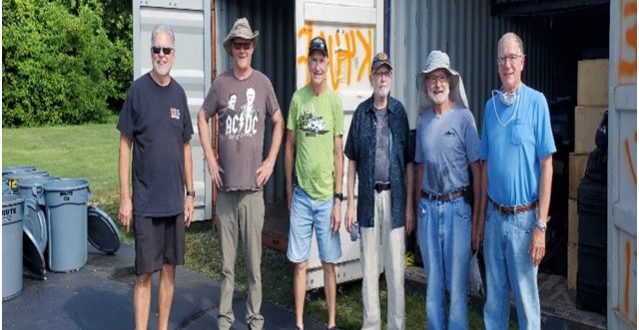 Six members of the VP6R team met in Peoria, IL last week to write the final chapter of the 2019 Pitcairn operation conducted by Pacific Islands DXpedition Group (PIDXG). Actually, the primary purpose of the meeting was to unload the DXpedition’s 20-foot shipping container with all of the VP6R DXpedition stations, antennas, supplies and personal gear that had just arrived from New Zealand. It had returned to Craig K9CT’s place of business following an incredible 14 month journey that was prolonged by the outbreak of the Corona virus and ensuing global pandemic.

On hand for the container unloading party were DXpeditioners George N4GRN, Gregg W6IZT, Glenn W0GJ, Ralph K0IR, Craig K9CT and Hal W8HC who wasted little time in the summer heat removing the dozens of palletized totes, Pelican cases, plywood boxes and antenna systems. All equipment was inspected, inventoried and staged. The team is happy to report that all returned items appear to be in great shape in spite of the long and circuitous journey out in the Pacific.

The FlexRadio 6700s and Maestros which performed flawlessly on Pitcairn, as well as the Acom power amps were prepared for return shipment back to FlexRadio and DX Engineering respectively. The impressive falling derrick antenna components, designed and supplied by DX Engineering, will be used on future DXpeditions.

The VP6R team left behind a few antennas at Pitcairn for three of the resident hams. It is worth mentioning that Meralda Warren VP6MW will soon be QRV with a new rig she purchased from DX Engineering and is currently in shipment to the Island. For anyone who might have missed VP6R yet still needing Pitcairn for a “new one,” it has been suggested you contact Meralda or, by contacting her new QSL manager- Mike W0VTT also of the VP6R team, to arrange a possible schedule.

According to Gregg W6IZT, who made a 9 hour drive from his Georgia QTH to participate in the VP6R container unloading party, “We had a very productive two days and accomplished a lot at Craig’s. But even more than that, being together with some of our team following all of the cancellations and travel restrictions as a result of the pandemic was a very nice mini-reunion for us after these past 5 or 6 months.”

The members of the VP6R team once again extend their thanks to the global DX community, sponsors and generous donors for their part in making this DXpedition such a success. Of course, special acknowledgement and appreciation goes out to FlexRadio, DX Engineering and Acom Amplifiers for providing VP6R with world-class stations. The team also wants to send along its heartfelt thanks to the wonderful Pitcairn people for their generous hospitality and friendship, “They made us feel like family in every respect and we will never forget the amazing time we had at Pitcairn Island,” reminded Glenn W0GJ.

Finally, this Peoria meeting by the Pacific Island DXpeditioners also provided them with an opportunity to discuss their future DXpedition plans and possibilities… Please QRX… more to follow.