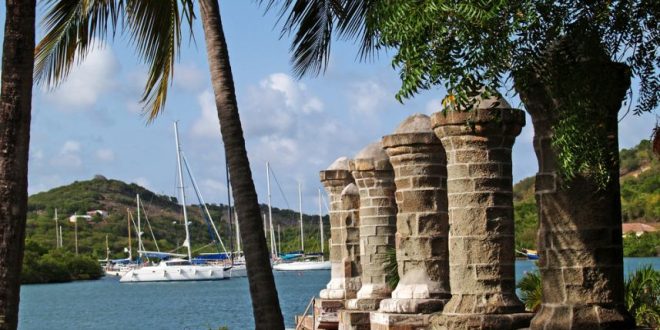 Antigua – A Sparkling Gem in the Caribbean

Located in the Leeward Islands of the West Indies, in the romantic Caribbean, Antigua is a relaxing destination for any traveler looking for tranquil beachfront elegance. Called Waladli (our own) by the Indians native to the island, it was renamed Antigua (ancient in Spanish) by the first European to set foot on the island paradise, Christopher Columbus. The name was bestowed in honor of the “Virgin of the Old Cathedral” (La Virgen de la Antigua) in southern Spain.

Antigua was originally inhabited by the Ciboney Indians, followed by the Arawaks, who sailed from what is now Venezuela. The Arawaks we later driven out by the fierce Carib Indians, who enslaved some of the Arawaks and cannibalized others. No Europeans had ever seen the island until Christopher Columbus landed there is 1493, followed by Englishman Sir Christopher Codrington in 1632. Codrington established the first European settlement and developed a successful sugar plantation (Betty’s Hope). Lord Horatio Nelson later developed a strong commercial shipping industry in the 18th century, and Nelson’s Dockyard still survives to this day.

The Antiguan economy relies on the tourist trade, and there are a number of fine hotels and smaller cottages to be found all over the island. There are two thriving medical hospitals, the University Of Health Sciences Antigua (UHSA) and the American University of Antigua (AUA). These institutions teach aspiring doctors and contribute significantly to the island’s economy. The population of Antigua is only 80,161 (according to the 2011 census), with its capital city, St. John’s, home to 31,000 of those citizens. The East Caribbean dollar is the legal tender of the island (2.70 East Caribbean dollars equal one U.S. dollar).

The major sport in Antigua is cricket, no doubt due to the British influence on the island. Antigua was host to the 2007 Cricket World Cup. Antigua Sailing Week and the Antigua Classic Yacht Regatta are important events on the island, and a number of prestigious yachts and sailing vessels jam the ports during the events. Sport fishing, windsurfing, football (soccer), golf, and basketball are becoming all popular sports in Antigua. And visitors can now climb to the highest peak on the island in the Shekerly Mountains, Mount Obama. Formerly Boggy Peak, in the southwest part of the island, it was once a congregating place for runaway slaves. In honor of the 44th President of the United States, the Prime Minister of Antigua and Barbuda, Baldwin Spencer, renamed it Mount Obama on August 4, 2009, President Obama’s birthday.

Though the main draws of Antigua are its stunning beaches, there are a number of other attractions to visit.

Tourists can also visit the Springhill Riding Club at English Harbour, the pink sand beaches of Half Moon Bay, and the rustic Museum of Antigua and Barbuda. Betty’s Hope, that original sugar plantation established in 1674 by Sir Christopher Codrington can still be seen in St. John’s, preserved as a museum and monument to the slaves who were so cruelly exploited. With a rich history and incredibly beautiful scenery, Antigua is a popular stop for travelers, as well as a destination for those seeking peace and tranquility in the modern world.

ARISS Contact Scheduled with Patients at the Children’s National Hospital

Elvira, IV3FSG will be active as C92R from Mozambique in October 2021.She will operate on …