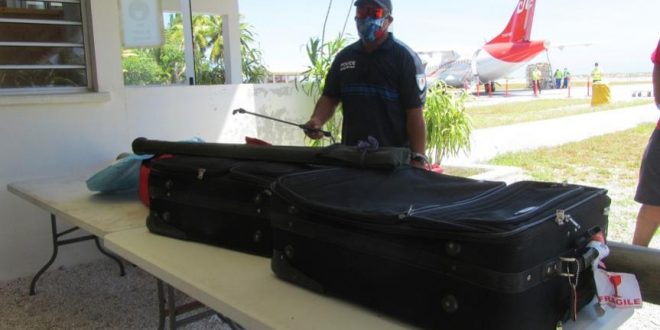 Tatakoto was first sighted in 1774 by two Spanish navigators who independently landed there on Oct 29, the same day I reached it in 2020. Located about 1200 km from Tahiti, toward the NE edge of the Tuamotu Archipelago, the atoll is the only counter of the IOTA group OC-298. About 14 km in length and 3.5 km in width, it has one large island to the north and 65 islets to the south, with a land area of 7.3 km2. The first missionaries built a large assembly at its NW corner, while a small monument called Pitou sits close to its NE end. Tradition says that you must reach the latter in order to claim that you visited the atoll!
The main island had three settlements at one time, but one of them was ravaged by the Spanish flu and abandoned in a hurry, while a second one was later vacated too. There are 260 people now in the village of Tumukuru. Homes are built of reinforced concrete, with steel roofs to withstand occasional cyclones. The road to the airport, as well as others across the village are also made of concrete, as locals drive small trucks and vans up and down to do their chores. Besides working on government financed projects, including airport maintenance and large boat anchorages, locals are harvesting copra, go out fishing, grow vegetables, but also invest recently in bee hives and vanilla. The atoll is crowded with crabs, lobsters, and famous for its huge density of large clams, maintained through repopulation efforts after intense harvesting.
Alain (FO5RH) is a resident of Tatakoto since 2004. As a result of frequent power grid failures that damaged his equipment, periods of activity alternated with large periods of inactivity. Despite him having logged many contacts from there over the years, island chasers were still awaiting for the first operation since the atoll become part of a new IOTA group in June 2019.
The activity from Tatakoto took place between Oct 30 and Nov 5, 2020. My equipment included an IC-7000 with KPA-500 and a multi-band wire vertical. The log lists 5817 QSOs with 3738 stations in 99 DXCCs on 6 continents. About 30% of contacts were on 40 m, over 18% on 30 m, 22% on 20 m, almost 29% on 17 m, and 1% on 15 m, with 95% of the QSOs in CW and 5% in SSB. The continental distribution of contacts was AS 26%, EU 30%, NA 38%, SA 3%, OC 2%, and AF <1%. The top six DXCCs by QSOs and number of stations were K, JA, I, F, DL, and UA.
I would like to thank the administration of the Commune de Tatakoto for allowing me to carry out this project and providing the necessary accommodation. Puhia, Christian, Ludo, Pierre, and Emanuel are much appreciated for their help and support throughout my stay. I also wish to thank George (VE3GHK) and Adrian (KO8SCA) for the technical support.
I acknowledge the sponsorship received from International Radio Expedition Foundation (IREF), European DX Foundation (EUDXF), German DX Foundations (GDXF), Swiss DX Foundation (SDXF), DXNews.com, CDXC: The UK Foundation, Clipperton DX Club, and Southeastern DX Club (SEDXC). I am very grateful to Bob/KD1CT, Mel/AB6QM, Toshi/JM1PXG, Chuck/N6FX, and Ted/K8NA for their exceptional support, to the top donors DL4KQ, I2YDX, JF4VZT, JJ8DEN, K0DEQ, OE3WWB, ON4IZ, PT7WA, SM3EVR, SM3NXS, SM5LNE, VE7QCR, W1JR, W5VY, W5ZPA, W8JRK, and many others for their assistance.
TX0T Photo Gallery Tatakoto Atoll, French Polynesia.

Sanitizing all luggage upon arrival at Tatakoto.

Antenna setup in the local schoolyard. The mast broke at some point not that far from the top, by falling over a closed metal gate, and I repaired it using some bamboo sticks.