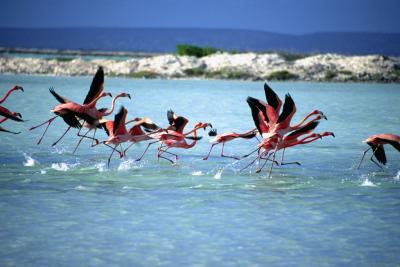 A picturesque island which forms the ABC islands along with Aruba and Curacao, Bonaire is as beautiful as it is serene. Located near the western part of Venezuela, it has an area of 294 kilometres square and a small population of about 17,408.

The word ‘Bonaire’ actually means ‘good air’ though the origin is said to be from the Caquetio word ‘Bonay.’ The island lies on the continental shelf of South America and is thus considered to lie entirely in the South American belt.

The first official inhabitants of this island were the Caquetio Indians, who came from Venezuela over 1000 years ago. These inhabitants were considered to be giants for with the arrival of the Spanish the Island was given the name ‘Ias Islas de los Gigantes’ or ‘the island of the giants’. With the coming of the Spanish conquerors most of these islands were considered to have no value and thus the islanders were made to work as slaves for the Spaniards. With the arrival of the Dutch West India Company in the ABC islands and the Eighty Years War between the Dutch and Spanish, the Island faced many hardships and was captured by the Dutch in 1636. During World War II Bonaire was a protectorate of the British and United States and finally in 2010 Bonaire became a special municipality of the Netherlands.

The beautiful island of Bonaire lies outside the hurricane belt and the highest point is the mountainous Brandaris which offers a complete view of the island. Lac Bay or Lac Cai, as it is also known, is a windsurfer’s paradise where professionals from all over the world come for the surf. The Atlantis Beach on the western side of the island is the best place for kitesurfing and for those who wish to keep their feet planted firmly to the ground, the Washington Slagbaai National Park, located in the north of the island, is perfect to visit. Maximum of the population depends on tourism for their livelihood and thus there are many bed and breakfasts available on the island for tourists to stay in during their visit. Most of the resorts here are based on time-share, so it is better to stay in the bed and breakfasts to experience the island in every way possible.

Visit to the Cadushy Distillery

A visit to the Cadushy Distillery is a must when on the island of Bonaire. The distillery is famous for its variety of home-blend creations such as vodka made from cadushy cactus, whiskey made from the local maishi chiki and smoothly spiced rum. The distillery is generally open on Mondays, Wednesdays and /Fridays from 10:00 am to 5:00 pm.

The small island of Klein Bonaire is located just 750m off Bonaire’s western coast. Just a short water taxi ride away, this island offers a full view of the island of Bonaire and is perfect for honeymooners as it allows one to get away from the hustle and bustle of the busy island.

For the more adventurous tourists, the hike across the Washington Slagbaari National Park is the best attraction. You can visit the museum dedicated to the Park at the entrance of the Park to learn a little about the history and the area of the Park and the animals that live in their natural habitat before you actually visit the park. The park covers about 5.643 hectares of land and is made mainly to protect and restore the environment of the island. There are about 340 species of flora in this national park ranging from various cacti to shrubs and other plants. The animals found in the park are bats, iguanas, Caribbean flamingo, Yellow-shouldered parrot, snakes and lizards.

For bird watchers, this island is a paradise, as here you can watch the Flamingo’s in their natural habitat. Even though the flamingo sanctuary is not open to tourists, they can be seen from the salt company or the Willemstoren lighthouse. These birds are very timid and shy and thus must be protected at all costs. Watching these birds is a delight as they live, eat and procreate on this island.

For all those thrill seekers visiting the island, kite surfing is just up your alley. The shores of Atlantis offer lessons, rental equipment and rescue equipment for all water sports lovers. The tradewinds and the calm and crystal clear waters of the Atlantis shore is perfect for those who wish to take up this sport.

Visit to the Donkey Sanctuary

This Sanctuary was made to help donkeys that have been injured, abused or orphaned on the island of Bonaire and provide a healthy and safe home to all the donkeys on the island. Donkeys were transported on the Island by the Spaniards to be used as transportation and carriers of goods. Here tourists can see as to how donkeys have adapted to this habitat and how the animals need to be protected. Tourists can interact with the animals in the Sanctuary and can also help feed them during their feeding hours.

In order to see the wildlife surrounding the Island in the blue seas, snorkelling trips are available in almost all parts of the island. There are special trips available through most dive shops and sail charters that help tourists come closer to the deep blue sea. Snorkelling can also be done in the Washington Slagbaai National Park. Night Snorkeling is also available for tourists to see the different creatures of the deep.

The beautiful island of Bonaire is picture perfect for families that want to experience fun and adventure together and is also perfect for thrill seekers who wish to go head to head with the uncontrollable Sea. And even though it has been ravaged by other countries, this untameable island has shown people that even though it cannot be conquered, it has a rustic beauty to it that just cannot be achieved by man alone.

Where is Bonaire Island located. Map.